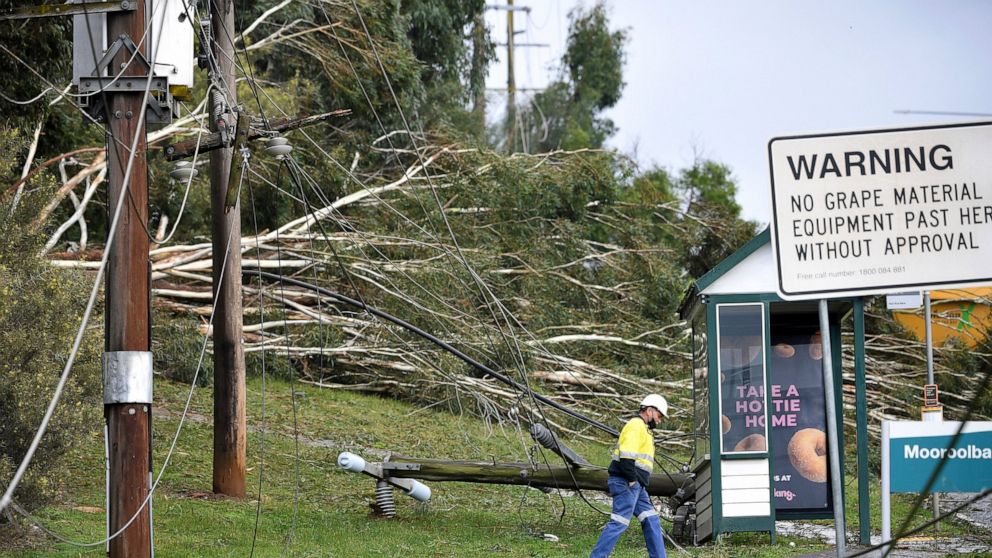 Wild weather in southeast Australia has toppled trees, trapping people in cars and houses and cutting power to more than 200,000 homes as many braced for flooding

MELBOURNE, Australia — Wild weather in southeast Australia toppled trees, trapping people in cars and houses and cutting power to more than 200,000 homes as many braced for flooding.

The extraordinary weather system that hit Victoria state and its capital Melbourne Wednesday night brought wind gusts of up to 119 kilometers (74 miles) per hour and up to 20 centimeters (8 inches) of rain, meteorologist Kevin Parkin said. There were no reports of serious injury.

As the wind and rain moderated on Thursday, the flood risk increased from rising rivers. Around 220 homes threatened by a swollen creek were ordered to evacuate at Traralgon, east of Melbourne, State Emergency Service chief officer Tim Wiebusch said.

Australia’s second most populous state had not been lashed by such a severe wind and rain event since 2008, officials said.

Several major roads had been closed by floodwater, a landslide and fallen trees. Collapsed powers lines also posed dangers and left more than 200,000 homes across Victoria without electricity.

Emergency services received more than 5,000 calls for help, and 3,500 of those related to trees falling on houses and trapping people.

A woman in her 40s was taken to a hospital in stable condition with head injuries after a tree struck her home, police and the state ambulance service said.

Police officers walked 1.5 kilometers (a mile ) to a house in the Dandenong Ranges east of Melbourne to reach the woman who reported a tree had struck her house and separated her from her elementary school-aged son. Emergency workers were able to clear a road so that the mother and son could be taken to paramedics.

New South Wales, Australia’ most populous state on Victoria’s northern border, was in the grip of a cold snap on Thursday with unusually heavy and widespread snow falls cutting power to hundreds of homes.

Several parts of the state were forecast to reach near-record low temperatures for the month of June before warmer weather on Friday.